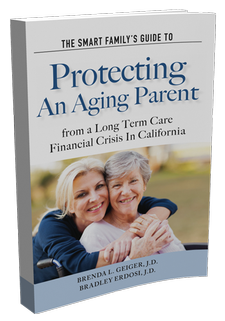 ENTER YOUR INFORMATION ON THE FORM ON THIS PAGE TO RECEIVE A FREE COPY OF MY BOOK ON LEGALLY PLANNING AHEAD FOR LONG TERM CARE.

Brenda Geiger and Bradley Erdosi have written this book to provide you with valuable information regarding the types of problems we help our clients solve.  Elder Law attorneys help seniors plan access to future medical care, and help ensure that aging adults continue to have a high quality of life when it matters most.  You may not have ever thought about or even thought to ask some of the questions answered in this book.  Our purpose is to act as your guide to help you plan to protect yourself or a loved one so that you are not forced into the court process down the road or left wondering “how are we going to afford the pay for long term care”.  This book is about ensuring your piece of mind.

Please see below a preview of the information provided in this book:

In the big picture of planning for the real possibility of a long term care triggering event, there are two types of planning. There is the proactive approach where we plan ahead so that if and when a triggering event occurs, we have a lot more options to cover the expense of care and have the right people in place to help in the process of caring for an aging parent.

The next type of long term care planning is crisis planning. It’s pretty much just like it sounds. We wait until a catastrophic event occurs (the stroke, heart attack, dementia, broken hip, etc.), and then we make a mad scramble to gain access to good health care, figure out how to pay for it and if still possible, put the right people in charge of the management of the finances and health care of an aging parent (sometimes required through court action).

Outside of the obvious difference between proactive and crisis planning of having either more or less options when the triggering event occurs, another big difference is the cost of the planning. Crisis planning costs significantly more from a legal planning fee perspective as well as the true cost for assisted living and medical care to the aging parent and/or his or her family.

To provide an example, imagine Aunt Betty who is 78. Aunt Betty often has lapses in her memory but all in all she is still in good health and able to take care of herself in her home. Aunt Betty has two adult children and several grandchildren but both of her children live out of state. Aunt Betty has a home in Southern California that is now worth close to $900,000 (she and her late husband purchased the home 40 years ago for $100,000). Betty also has a car, but it’s not in very good condition.  She also receives social security income of $1,000/month and a small pension of $1800/month from her late husband’s company. Finally, she has a $100,000 CD at a local bank. Looking forward, there is a possibility that Betty may need in-home care or nursing care at a facility as a result of a dementia or Alzheimer’s disease diagnosis. Betty’s mother developed Alzheimer’s in her early 80’s and lived with the disease for 10 years.

Can Betty be helped? There are strategies and techniques that can be used to plan in advance how Betty would like to be cared for and how the cost of care will be covered. By pre-planning now, Aunt Betty may be able to preserve assets so that she does not end up in a crisis situation, requiring her to quickly spend down her assets in order to quality for government benefits. Aunt Betty also needs to make sure that she has an Advance Health Care Directive, HIPAA Authorization, “Expanded” Durable Power of Attorney for Finances, as well as one or more trusts to transfer assets to her children.

It is probably also a good idea for Aunt Betty to consider developing a good relationship with a geriatric care manager and Elder Law attorney to help her because her children live far away. Incapacity is not typically something that happens over night, but rather is a gradual process.  Thus, in all circumstances, it is best to have someone there for an aging parent to rely on for support and advice, should more assistance down the road be required.

In Aunt Betty’s case, her home is her largest asset. She really wants the home to be transferred to her children who grew up in the home. There are some important planning steps that should be undertaken to protect the family home from a later Medi-Cal recovery action. This can be accomplished through a special type of Irrevocable Trust (See Chapter 8 for more details). Other assets may be transferred to this special type of irrevocable trust as well. The interesting part of the trust is that we can have a trusted person in charge of that trust and that person can have the ability to make lifetime distributions from the trust to the beneficiaries of the trust (usually the trustmaker’s children).

The sooner we do this however, the better. California has adopted the DRA (Deficit Reduction Act of 2005), but has not yet implemented it. New promulgated regulations have been introduced for public comment as of the publication date of this book.  We are now awaiting approval and adoption of the new rules, thereby changing California Medicaid (Medi-Cal) law. One of the major effects of DRA implementation will be an expanded penalty period, including when a penalty period will begin as a result of gifts being made. Currently, if any penalty period is triggered, the penalty runs from the date the gift was made, not when an application for benefits under Medi-Cal is filed. That is expected to change when the DRA is implemented in California. The penalty period will begin on the date of application for Medi-Cal provided that such individual is otherwise eligible for Long Term Care Medi-Cal. This is a huge change from the current law and will severely restrict and affect new Medi-Cal applicants.  This will impact many unknowing seniors who make gifts to family members and who will need nursing home care in the future. For example, if Aunt Betty made a gift to an irrevocable trust for her children that triggered a 10 month penalty period right now, (current law in California), the penalty period would run from the date she made the gift and it would expire in 10 months. Under the new proposed rules, if Betty applied for benefits even 59 months from now, the 10 month penalty period would begin at that point in time, making her ineligible for Medi-Cal for 10 months from the date she applied. Therefore, doing the planning now has a huge advantage under the current set of rules.

There are many other strategies and techniques to help aid a family in planning for long-term care. Veterans benefits may also may be a part of the planning process for long term care. But, careful planning is required when looking at the big picture.  The rules for Medi-Cal and for VA benefits are very different. One could obtain VA benefits and inadvertently make him/herself ineligible for Medi-Cal which could end up providing an aging adult with better overall coverage. It is best to speak with an accredited VA attorney versed in Medi-Cal and Veterans Benefits before doing anything that would jeopardize future benefits. For more on planning for Veteran’s benefits, see Chapters 7 to 9 of this book.

Imagine John. John worked for a phone company for 45 years. John has been retired for about 15 years and will soon be 80 years old. John's wife Emma died 10 years ago from a long battle with breast cancer. Unfortunately, her medical bills fighting the cancer chewed up much of John and Emma's savings. John has two children. His daughter Sara lives about 40 miles from John and his son Tom lives out of state with his family.

John has slowed down a lot in the last year or two and his balance isn't what it used to be. John has high blood pressure and has had two stents put in over the last year. His daughter Sara is very concerned about what will happen if John has a stroke or falls.

John has about $160,000 in his savings account and has a monthly income of about $3500 from his pension and Social Security together. John does not have any long-term care insurance, but he does have a basic estate plan in place. The estate plan however was drafted over 20 years ago and John and Emma never updated their plan. There have been many changes in the law and in John and Emma's financial situation since the trust was drafted 20 years ago.

John's daughter is married with two children and is a nurse at a local hospital. She checks in on John as often as she can with her busy work schedule and family life, but it's a challenge. She's recently become quite worried about John's health because he's had a couple of falls and he had two stents put in last year. He's also become more forgetful in the last six months.

Because Sara is a nurse in the emergency room, she has been exposed to some training on qualifying for government benefits for long term care stays. Though she's not an expert, she knows enough to contact a local elder law attorney that she has referred past patients of the hospital to.

Do to the emergency nature of the situation, Sara was able to get an appointment with the attorney the next day. The attorney suggested that John execute a special type of immediate Power of Attorney, a new Advance Health Care Directive and a HIPAA Authorization to Release Medical Information. She also recommended that John set up an irrevocable trust and transfer his home to it, all before he goes in for surgery in two days.

The need to do this prior to the surgery is critical because John may come out of the surgery lacking the requisite capacity to do any legal planning and Sara and her brother could wind up having to spend nearly all of John’s savings before he could qualify for any government benefits if needed. They could also wind up needing to get him under a conservatorship because his existing documents are so old. The attorney was able to visit with John in the hospital right away to make sure that his wishes were met. But this ended up costing John and his children significantly more than if they had planned ahead.

Fortunately, the attorney was able to turn around drafting of the documents by moving clients around to accommodate the emergency situation and set up the irrevocable trust plan before John's surgery. The attorney also set up a strategic gifting plan through Sara as John’s Power of Attorney agent to move some of John's assets into the irrevocable trust so that the family could preserve some of John's assets in a protected way in case he became incapacitated or had a lengthy stay in the skilled nursing facility. The home is now safe from a future Medi-Cal recovery action.

If John and Sara had planned ahead in advance of this crisis, they could have protected all of his assets and spent a lot less to get that done.

Fill Out the Form Below